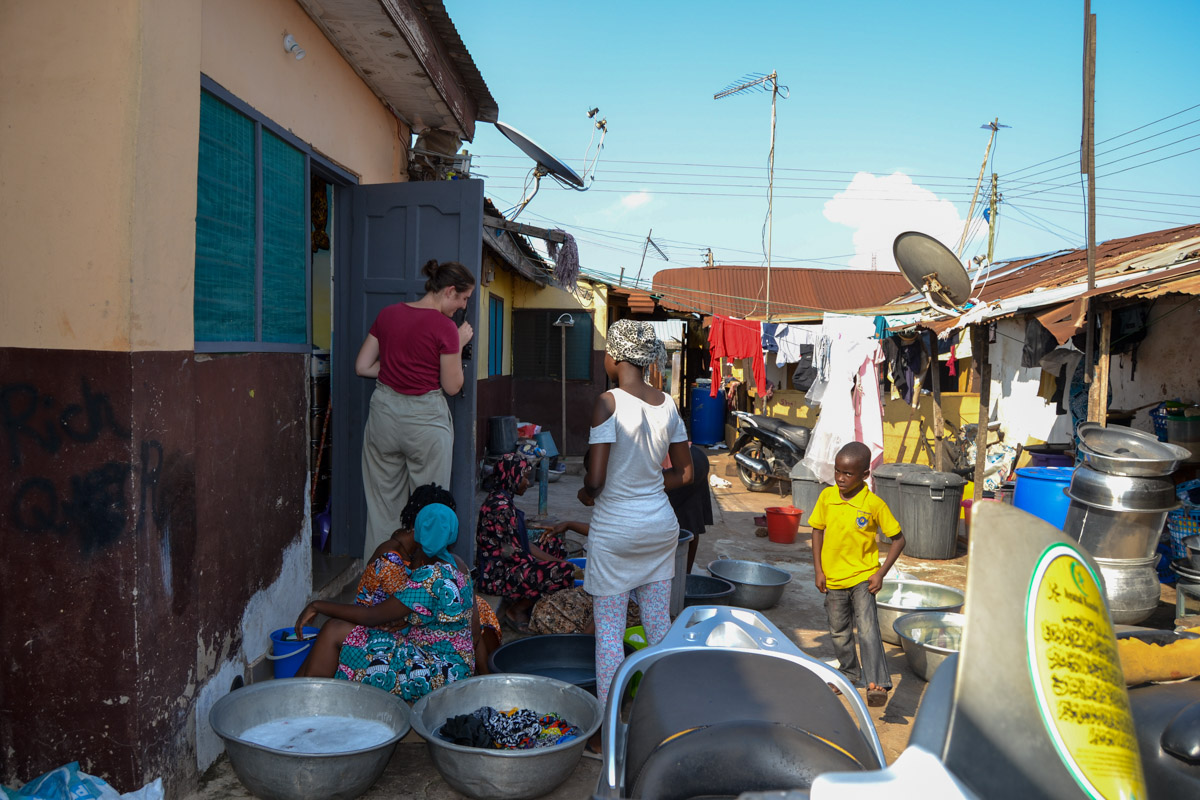 Meaning of the word Zongo:

Zongo is a Hausa term, meaning the temporary camping place of a carrier or a lodging place of travellers. Zongo are mostly migrant communities in urban areas dominated by people of Northern Ghana and the Sahel region of Africa and mostly traders.

Ghana has its own Ministry of Inner-City & Zongo Development (MICZD). The Goals are to empower

the indigene communities through a Coordinated Programme of Economic and Social Development. With the fight against poverty, disease and illiteracy the Ministry is responding to the Sustainable Development Goals (SDGs 11) “making cities and human settlements inclusive, safe, resilient and sustainable”.

The picture below is showing some typical inner-city and Zongo scenes in Nima-Accra.

This is where our founder and chairman Amin Zaaki was born and raised. It’s where our Aminu Initiative has been active together with our Ghanaian partners for so many years.

Likewise the MICZD is responding to global and local development goals, we are responding by empowering less privileged children from the Zongo areas through education and furthermore taking care of their health.

The Covid-19 crisis put the Zongo areas in an even worse position, as many people cannot afford to pay the skyrocketed prices for foodstuffs gain. Therefore our Aminu Initiative is currently providing food to the kids and families in our programs in order to reduce the burden on them.

We live in an era where drugs have captured the headlines. Youth have taken to the neglect and have abandoned their duties. What is the reason one may ask? They have taken the habit of using drugs. Who says the use of drugs is wrong? Not at all, but why it’s illegal intake?  I don’t think anyone would love to put one’s self in harm’s way.  Why illegal drug abuse?

According to the “Collins English Dictionary”; Drug is a chemical which is given to people in order to treat an illness. From the above definition, what’s illegal in taking drugs? Unfortunately, people take in drugs due to its pleasant effects on illegal drugs. The Zongo community can boast of few students, Truthful Islamic scholars and from my research, one Muslim female Doctor; but why the high rate of drug users? Between the ages of 10 and 25 is now a cycle of illegal drug usage. Sadly they find pleasure in it thereby, not realising its harmful and deadly effects. Cocaine, Heroin, Marijuana, etc. are still used in Zongo, despite Pharmaceutical Drugs such as Codeine, Benylin and Tramadol are popular drugs and used on highly illegal grounds by the “Zongo” Youth. Codeine and Benylin are mixed with energy drinks and taken. Also, Tramadol, available as injection and sold under the brand name Ultram, zytram, diazepam, paracetamol and morphine.

Fatal side effects can occur if one uses Tramadol with alcohol and can cause slow breathing leading to deadly attacks. Peer pressure and curiosity used to be the major causes of Drug Intake. Personally, the above mentioned are not the causes anymore. In our Zongo community now, most drug users can’t give cogent reasons for abusing drugs. I must say, there is no justification in abusing drugs. The youth are not ignorant about the harmful effects of illegal drug usage instead; they just abuse it to satisfy their desires. A shame indeed! Nima, Fadama, Maamobi, Newtown, Madina and Ashaiman can boast of teen and elderly drug users. We can’t boast of white-collar workers, technically skilled persons and even entrepreneurs. One may say we can but countable.

To the individual, illegal drug intake may cause serious health problems. On the society, very horrific, including crime and depleted resources. To the country, illegal drug usage hinders future development on the basis. They taking drugs illegally shatters their creativity skills needed for a future progress. Government also spends huge revenue in their rehabilitation. To the streets of Nima, many young people are suffering from mental disorders which are a result of illegal drug intake. Intensive health-walks, strict government laws, opinions from religious Heads, etc., suggest ways in curbing drug intake in our community. Illegal Drug intake is claiming the lives of our youth; let’s not give chances in driving it away. Let’s take a bi-partisan method in eradicating illegal drug usage in our Zongo. I vividly believe we can do better and unearth the creativity in our youth.

Say no to illegal drug usage. Zongo must change!

Our Junior Program student Zeinab Lavielle Ibrahim is the founder and leader of Girls Against Drug Abuse (GADA).

It’s a team of Young Nima Girls who seek to aid in curbing the alarming situation of Illegal drug usage and control rising situations among the Zongo Youth . It was formed on January 30, 2020 by Lavielle and her Colleagues.

Below are the main goals of GADA:

On 26th June 2020 they organised an event to mark the International Day against Drug Abuse. Due to the pandemic, they discussed a lot on how to go about the drug abuse situation in their Zongo especially in Nima. Due to Covid-19 they did everything online.